Dynamic, multicultural, free-spirited Melbourne will enchant anyone who loves to explore big cities. It captivates with its versatility, which makes it possible for everyone to feel comfortable here. Melbourne is art and culture, history and modernity, natural treasures and urban masterpieces. Not all tourist destinations can boast such a variety of interesting places and entertainment. Here you can spend days wandering around museums and looking at architectural monuments, get acquainted with local street art and spend evenings in noisy bars, lie on the grass in parks and walk through colorful city blocks. The hospitable cultural capital of Australia is a metropolis with a soul that is felt in every detail. A trip to Melbourne is always an unforgettable, unique experience. 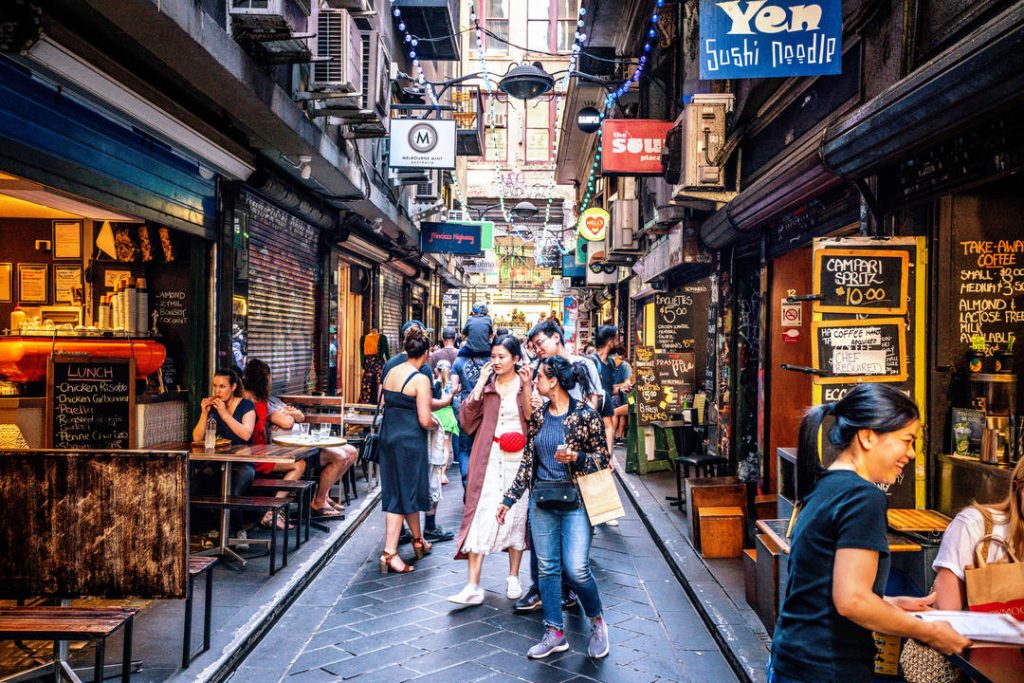 Not sure where to go in Melbourne to be surrounded by cultural monuments, art galleries, museums, bars and cafes? It’s simple – start your acquaintance with the city by visiting Federation Square. This is not only one of the most popular locations in the metropolis, but also the main venue for social events, as well as the starting point for many excursions.

Federation Square is a complete city block bounded by Swanston, Russel, Flinders and the Yarra River. Here are the National Gallery of Victoria, the Australian Museum of Racing, the Film Center, as well as many kinds of shops and entertainment infrastructure.

On the south bank of the Yarra River is one of the most fascinating locations – the Royal Botanic Gardens. If you are looking for beautiful places in Melbourne, you are definitely here! About 10 thousand species of plants from different parts of the world grow on the territory of gardens with an area of ​​38 hectares. The exposition itself is divided into several thematic sections, depending on the regions from which they were brought. Plants are also being researched here and work is underway to create a national herbarium. Every nature lover should definitely look into the Royal Botanic Gardens to enjoy stunning exotic landscapes and take some time for meditative relaxation.

The National Gallery of Victoria is the oldest art museum in Melbourne and in all of Australia. It was founded in 1861 during the gold rush. It was during this period that local wealthy patrons willingly invested in replenishing her collection. Here you can see the paintings of such legendary artists as Rembrandt, Rubens, Veronese, Bernini, Picasso, Monet and others. In addition, the exposition presents works of Asian art, finds from Ancient Egypt and Ancient Greece. The gallery also regularly hosts temporary exhibitions and thematic events dedicated to design, fashion and other areas of art.

The most famous fact from the history of the gallery is the theft of Pablo Picasso’s “Weeping Woman” in 1986. This was done as a sign of protest, since the authorities allocated too little state budget funds for the development of art. The painting was returned a week later, leaving it in the station’s locker room.

St. Paul’s Cathedral is the largest Anglican church in Australia, which at the time of construction was the tallest building in Melbourne. The construction of the temple began in 1880. The official completion date of the work is 1891, but after that, the tower and spire were completed for another 35 years. Inside the cathedral, you can see an organ brought from England, consisting of more than 6,000 pipes. It is one of the largest in the world. Many come to church just to hear the sound of this ancient musical instrument. Another highlight of the cathedral is its color. Unlike other city structures, which at one time were built of limestone, sandstone was used to create the temple. Therefore, the building has a characteristic yellow-brown color and looks quite contrasting.

The Royal Exhibition Center is an impressive landmark of Melbourne, which is under the protection of UNESCO. The building, resembling a majestic palace, fascinates with its beauty. Its architecture combines many styles: Romanesque, Byzantine, Lombard and others. The construction of the center was timed to coincide with the opening of the 1880 Melbourne International Exhibition. The total area of ​​the building is about 12 thousand m².

It was here that the independence of Australia was proclaimed, and the first meeting of the local parliament took place. Today, the Royal Exhibition Center is most often used for exhibitions and cultural events.

The oldest market of Queen Victoria has not only tourist, but also historical value. It is also the largest open market in the Southern Hemisphere, which has been operating since the 19th century. The most impressive thing about this place is the variety of products. Here you can find literally everything – from clothes and jewelry to exquisite authentic delicacies brought from different countries. The market always sells fresh vegetables and fruits, cheeses, sausages, exotic spices, oriental sweets, seafood and much more.

If you do not know where to go shopping in Melbourne – do not miss the opportunity to experience this unique flavor! A small life hack: if you come to the market a couple of hours before closing, you can buy many products with a good discount.

The Eureka Tower is the tallest skyscraper in Melbourne, located in the city center. The main reason why you should visit it is the opportunity to enjoy the stunning landscapes of the metropolis from the observation deck of a skyscraper. From here you can see many of Melbourne’s famous tourist spots from a bird’s eye view. It is located on the 88th floor of the building. For thrill-seekers, there is a special glass cube with a transparent floor. Visitors can also visit the bar for delicious cocktails.

St Kilda is a picturesque coastal suburb of Melbourne, which is located about 6 km from its central area. During the Victorian era, it was considered a favorite haunt of the elite. Many luxurious mansions were built along the embankment, and the coastal zone began to quickly grow into an entertainment infrastructure. Expensive restaurants and cafes, attractions, cinemas and shops appeared here. Today, many people flock to St Kilda to relax, have fun and spend the day at the local beach. Also, mass cultural events and festivals are often held here. Top attractions in the suburbs include Luna Park, the pier, the Palais Theater and the Esplanade Hotel.

The largest Melbourne museum is definitely a must visit for everyone who wants to get to know the local history and culture. It consists of 7 main galleries, a children’s gallery, a research center and a separate exhibition hall for temporary exhibitions. There is also a cinema where documentaries are shown.

In the museum you can see artifacts that tell about the life of indigenous Australians and the inhabitants of the Pacific Islands, as well as many unique items related to geology, paleontology, zoology and other sciences. In addition, the library collection of rare samples of scientific monographs of the 18th-19th centuries is stored here. After a fascinating tour, visitors can look into a cozy cafe on the territory of the museum. 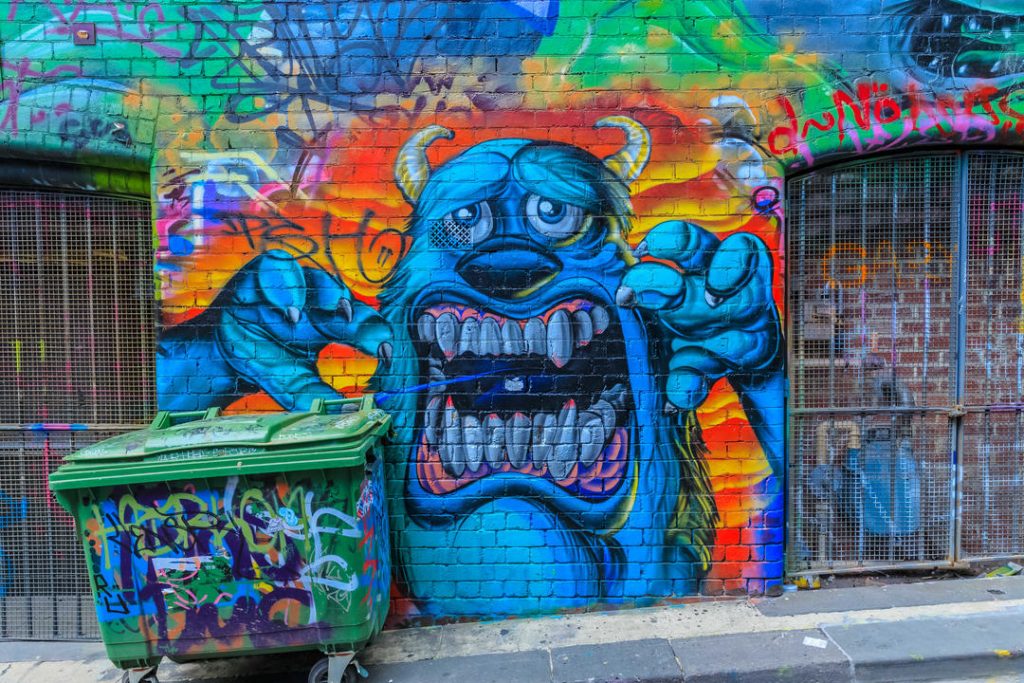 Local street art deserves special attention. The beginning of its development in Melbourne can be considered 1984, when the American artist Keith Haring painted his works here. For example, the artwork that flaunts on the wall of the College of Technology in Collingwood is on the Victorian heritage list. Over time, street art became part of the city’s culture and spread to other areas. And the owners of establishments and shops began to increasingly turn to local street artists to paint their walls. Many quarters can really be called open-air galleries. If you do not know what to see in Melbourne – take note!

To see as much art as possible, head to the Central Business District. Much graffiti is concentrated on Hosier Lane, Union Lane, AC/DC Lane and Duckboard Place, Coromandel Lane, Tattersalls Lane and Stevenson Lane, as well as in Fitzroy and Collingwood.