Scary fun: where to celebrate Halloween in 2022

Scary fun: where to celebrate Halloween in 2022

Halloween is a time of mysticism, creepy mysteries, horrors and endless fun. If you want to feel the atmosphere of the scariest night of the year, it’s time to stock up on pumpkins, original costumes, bags for sweets and book a plane ticket. For those who want to have an incredible experience on the eve of All Saints’ Day and tickle their nerves, we offer a list of the most interesting places to celebrate Halloween in the world. Ghost tours, graveyard and dungeon walks, zombie discotheques, Dracula’s castle parties and costumed parades – explore and choose the best holiday events of 2022.

The ranking of the best cities to celebrate Halloween is confidently headed by New York. On the evening of October 31, the largest Halloween parade in the world, the Village Halloween Parade, will be held here for the 49th time. From a small performance organized for children by puppeteer Ralph Lee in 1974, it has turned into a grandiose performance, gathering about two million spectators annually. At precisely 19:00, tens of thousands of zombies, vampires, witches and other monsters will gather in the Greenwich Village area and march along Sixth Avenue from Spring Street to 16th Street. Everyone can take part in the Village Halloween Parade. It is enough to put on your scariest costume and come early to the gathering place.

Halloween 2022 in New York will be full of interesting events. Go to the fifth annual Halloween 849 Ball at the Kimpton Hotel Eventi, have fun at the Masquerade from Collective and Matte or spend the night at the Superhero Ball at Locals Surf School – you choose. City museums did not stand aside either. The Museum of the City of New York hosts a costume contest and a masquerade, while the Children’s Museum of the Arts hosts a party and workshops for children. And what is Halloween without jack-o’-lantern? An array of giant glowing sculptures made from 7,000 pumpkin lanterns will be featured at the unique The Great Jack O’Lantern Blaze festival at the Van Cortlandt estate.

In 1692, the famous witch hunt took place in Salem. Therefore, it is not surprising that the city of sorceresses, filled with mysticism, magic and ghosts, has become one of the best places to travel on Halloween. The Salem Haunted Happenings festival takes place here every year from October 1st to 31st, the biggest All Saints’ Eve celebration in the world. In 2022, he celebrates his fortieth birthday. A grand parade, Haunted Biz Baz street fair, haunted tours, costume balls, family movie nights and chilling theatrical performances are planned to celebrate the event. Anyone who wants to get closer acquainted with the mystical history and secrets of Salem will be able to go on a night tour of the city and visit the Burying Point cemetery.

When you come to Salem for Halloween, don’t miss the opportunity to visit all the sites associated with the famous trial of 1692. Be sure to visit the Salem Witch Museum, located in an old Gothic church, and book a tour of the Witch Village, where ghouls and goblins await visitors. And in the local wax museum (Salem Wax Museum) you can see the real Frankenstein laboratory.

Throughout October, costume parties, masquerade balls and competitions for children and adults will be held in hotels and nightclubs. And restaurants and cafes are ready to offer guests original holiday menus.

Without a doubt, the best place to celebrate Halloween in Romania is Count Dracula’s castle in Transylvania. The mystical dwelling of the most famous vampire is located at the foot of the Carpathian Mountains, not far from the city of Brasov. According to legend, the prince of Wallachia Vlad the Impaler, who became the prototype of the main character of the famous novel by Bram Stoker, spent the night in Bran Castle during his campaigns. Those who come here on the evening of October 31 will have a unique opportunity to wander through the dark stairs, chambers, secret passages and dungeons of Bran, as well as listen to the terrifying legends of ghosts and vampires. Afterwards, guests of Dracula’s castle will enjoy a gala dinner and a fun costume party that lasts until 4 am. The next day can be devoted to a walk around Brasov or book a tour of the historical sites of Transylvania associated with Count Dracula.

In fact, Bran Castle never belonged to Vlad the Impaler. The prince stayed here only a few times, and the surrounding lands were his favorite hunting grounds. Bran became Dracula’s castle thanks to tourists who traveled to Transylvania in the footsteps of the hero of the book, Bram Stoker. It just turned out to be very similar to the dwelling of the famous vampire described in the novel. And Vlad Tepes actually lived in Poenari Castle, which is located in the county of Arges, on the southern spurs of the Transylvanian Alps. Unfortunately, only ruins remain of it. 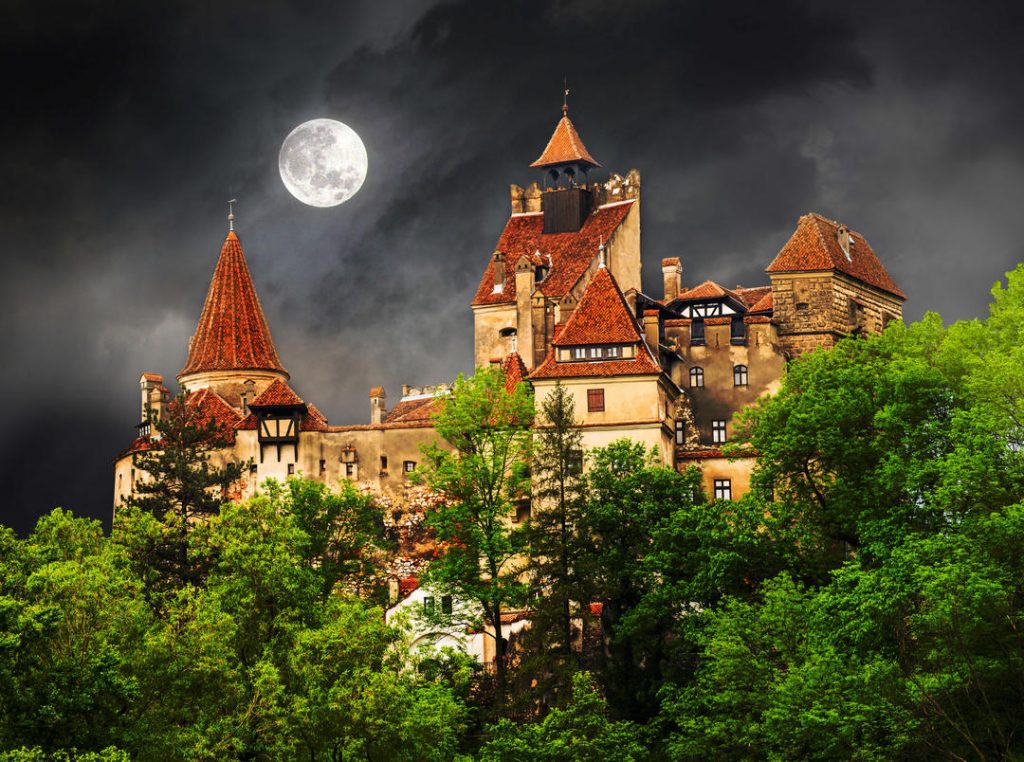 On Halloween, Sheffield decides to reveal his terrible secrets to the guests. You can get acquainted with the dark side of the city and hear its legends during the ghost tours, which start on Friday, October 14th. Book tickets and go on an exciting walk at dusk. Fear Fest, the largest dance party in Yorkshire, will take place on Saturday 29 October in Sheffield. Chase & Status, JAMIE DUGGAN, Shy FX, Darius Syrossian, TOM ZANETTI, Mr Traumatik, Phibes, Holy Goof, Kings of the Rollers, K MOTIONZ, Corrupt UK will perform at the grand costumed festival of fear, which will celebrate its tenth anniversary in 2022 and other stars. And on the night before All Saints Day, those who decide to celebrate Halloween in Sheffield will have a rich program – dozens of costume parties for adults, family events and pumpkin carving workshops, horror movie screenings, cemetery tours, creepy quests and ghost hunting in museum.